The Cabell Midland Theater Department put on the Disney musical Frozen Junior between February 14th and February 16th with a total of five shows over three nights. The show was directed by theater head and band director, Tim James, with the assistance of student director, Anneliese Luther. The crew was led by Stage Manager and Set Designer, Ron Caviani, and Assistant Stage Manager, Sarah “DD” Talkington.

The play depicts the conflict between two sisters, which culminates in one losing control of her ice powers. The other sister then goes on a journey to reverse the damage done. The lead roles went to Brooklyn Nelson as Elsa, Sydney Ooten as Anna, Owen Scibek as Kristoff, Naudia Cremeans as Sven, Alex McVey as Olaf, and Gavin Lewis as Hans. They were backed by a supporting cast of fellow students. The cast and crew faced many issues leading up to the play, including delays, sicknesses, and set difficulties, but come opening night, they put all that behind them to put on an excellent show.

The actors showed great chemistry on stage with physicality rivaling that of the animated original. The vocal performances of the cast went above and beyond expectations held at the beginning of the rehearsal process. The cast closely adhered to the writing of Jennifer Lee and the composition of Kristen Anderson-Lopez and Robert Lopez, while still managing to make the play entirely their own. In the end, everything came together as one of the department’s best and highest grossing plays to date. 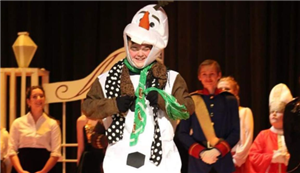 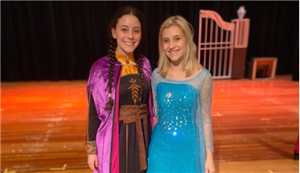